Located on an abrupt solid outcrop of limestone at the highest point of the village, it is known as the Castle of Casares.

From its location, it dominates the valleys, hills and coastal plains that spread across the mountain range of Ronda to the Bay of Algeciras, with views of Jimena, Castellar and Gibraltar. It served, therefore, as an element of communication among the coastal inlets of Manilva and Estepona and the forts, towers and hamlets of the interior, as well as the city of Ronda.

The ruins of the fort that are preserved, as well as the results of various excavations that have been completed in its site, do not offer information regarding settlements prior to the Medieval Age. As such, the first references to the fort are from Arab sources in the 13th century, when, as part of the Marinid protectorate, Casares became a point of great importance as one of the forts located between the coast of the Strait and the Ronda Mountain Range.

The walled area has an irregular polygon shape with numerous entries and exits caused by topographic conditioning, as the wall, especially in its southern, western and northern parts, follows the edge of a deep ravine known as “La Planá”. Because of this, the wall does not reach a great height, being in some parts (mainly on the edge of the ravine) not more than a mere handrail. The perimeter of the area is 770.50 metres and its surface area is 23,962 metres.

The population has continued extending, outside the walls, along the eastern hillside and other nearby hills, remaining inside the area of the Old Iglesia de la Encarnación from the end of the 16th century (certainly built over the main mosque of the medina, around which the houses were built), the suburb (the current Calle Arrabal “Suburb Street”) and the cemetery. Nowadays, there are also houses and tourist services located in this area (country houses, restaurants and an ethno-historic museum) as it is one of the most picturesque and beautiful areas of the municipality, a real must-see.

As well as the ruins of the wall, parts of the walls and towers of the Alcázar are preserved, located in the highest part of the plateau.

With respect to the entrances, the only access gate to the fort can be found on the flank, known as the “Arch of the Town”. It is situated in the interior of a tower with a square floorplan, forming a bent passage, which is currently home to the Museum of Ethno-History. A second gate opens to the north angle of the wall; a gate which gives access to the suburb and is known as the “Arch of the Suburb”. 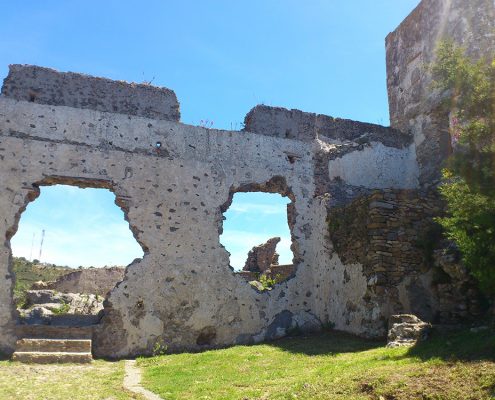