Distance: 8 km.
Duration: 3h.
Difficulty: Low-Medium until the Shelter. High in the Descent.
Method: On foot, by horse or by bicycle.

Description: The trail leaves from Casares and after leaving the road along a firm route it reaches Puerto de las Viñas before turning west in the direction of the shelter, located on the front slope of the valley. From the shelter, it descends along a path to the road which returns to Casares. This route is interesting because it offers magnificent views of the Crestellina mountain range and Monte del Duque. At the beginning of the route, it passes in front of an 18th century fountain known as the Fuente de la Arquita. The trail is full of typical Mediterranean forest vegetation: gall oaks, holm oaks, pines, carobs, lentisks, etc. We can also observe the flight of the griffon vulture, which has an important colony in this mountain range.

Distance: 8 km.
Duration: 3h.
Difficulty: Low-Medium until the Shelter. High in the Descent.
Method: On foot, by horse or by bicycle.

Description: This route leaves Casares in the direction of Estepona and follows a trail that crosses the Hondo and La Vieja streams, ascending to the area of Caules before heading towards the source of the Manilva river, known as Molino de Arriba. From there, it continues uphill towards Casares, not without stopping first in Cerro de la Horca.

This trail is full of richness and variety. At the beginning, it passes through a shady landscape with a wide variation of vegetation. It also passes through a forest zone dominated by cork oaks, pastures and old cereal fields.

It also contains ethnographic value as along the route a hydraulic traction watermill can be seen which used the current of the water to move its rocks that milled the cereal. This was one of the mills which provided the region with flour.

Finally, the trial leads to the old convent which was once used by the police, which gets its name from the fountain located below it: Santa Catalina.

Distance:5 Km.
Duration: 2 h.
Difficulty: Medium
Method: On foot, by horse or by bicycle.
Description: The trail leaves Espileta, a short distance from the Plaza de España. It ascends from a parking area, taking a small lane which leads to the crossing of La Manga-Celima. At this intersection, the descent begins along the way to Celima which leads to the road, which, in turn, leads it the coast; 300m along, the trail on the right leads to the intersection with the route to Hondo Stream which offers a return to Casares by turning right.

The peculiarity that this trail offers is the impressive views towards the Mediterranean, with views of Gibraltar and the Mountains of Africa. The journey passes through wooded areas of cork oaks, gall oaks and Mediterranean scrubland, also passing through an area of scattered residences.

Description: The trail leaves from the crossing of Acedia with the M-546 road. It descends along the trail until crossing la Acedia stream, passing through the public woods of the same name. After passing some houses, it ascends the slope of the Sierra Bermeja, passing the heap (trough for vultures) on the left.

The main slope leads to the dip in Garganta de la Acedia, commonly known as Pasada del Pino. From there, it continues southwards on the trail that ends abruptly and continuing along a narrow trail passes over the crest, which is connected to a forest slope that, having crossed la Acedia stream, leads back to the starting point.

This route is interesting because of the magnificent view offered of the Bermeja Mountain Range and la Acedia Valley. On clear days, it is possible to see the Campo de Gibraltar and the Mountains of Africa.

Description: It heads in the direction of the Camino de Gaucin, crossing a Roman era bridge, commonly known as La Albarra bridge, and ascending to Puerto de Ronda where the descent towards Camino de Ortejicar begins, after travelling along the edge of the carpentry workshops, following a strecth of a firm Roman path. It continues in direction of the Manilva-Gaucin road and, before arriving, it follows a trail on the left that leads to the way to La Molina, which goes along the left, on the edge of Cerro de la Molina on the south, passing the fountain of the same name and going in the direction of Canuto between Casares and Cancho Andares. At the end, it crosses Albarran stream and, along a trail that winds along Tajo de Casares, it ascends to the village to Calle Camachas.

This route is interesting because of the display of typical Mediterranean forest vegetation, with dry land crops and river vegetation along Albarra stream. It also highlights the natural landmarks of Cerro de la Molina and Canuto del Albarra.

Distance: 4 Km.
Duration: 3 h.
Difficulty: baja.
Method: On foot, by bicycle, by horse and by 4 x 4.
Description: The route leaves from the trail from Secadero to Casares near the farmhouse of Barrancon; at this point, a path on the right is taken before leaving it a few metres along for a diversion to the left.

The route passes along the Zarabanda stream, surrounded by reed beds, olive trees, cork oaks and Mediterranean mountains. It ascends along a trail until a small port where a group of country houses can be seen. Upon arrival at the trail crossing, it leads to the left to descend towards the Las Hoyas stream. After crossing this, the trail levels out beside the stream with the meadow of the Guadiaro river, joining the route of Nogales to return in a southerly direction to the starting point.

This route is typical because of the abundant vegetation found along the trail: gall oaks, olive trees and large stretches dedicated to growing citrus fruits.

Description: The route leaves from the road to Estepona, better known as “Los Pedregales”, just before the ford of the Acedia stream, where cars should be left in the car park before continuing along the route on foot.

The way continues along the stream in a southerly direction on the right-hand side. The clear water of la Acedia stream, with its source in the Bermeja Mountain Range, accompanies the trail to a fluvial canyon where the route ends and returns to the starting point.

The route is characterized by the exuberance of river vegetation, such as oleanders, black poplars and Mediterranean hackberries. 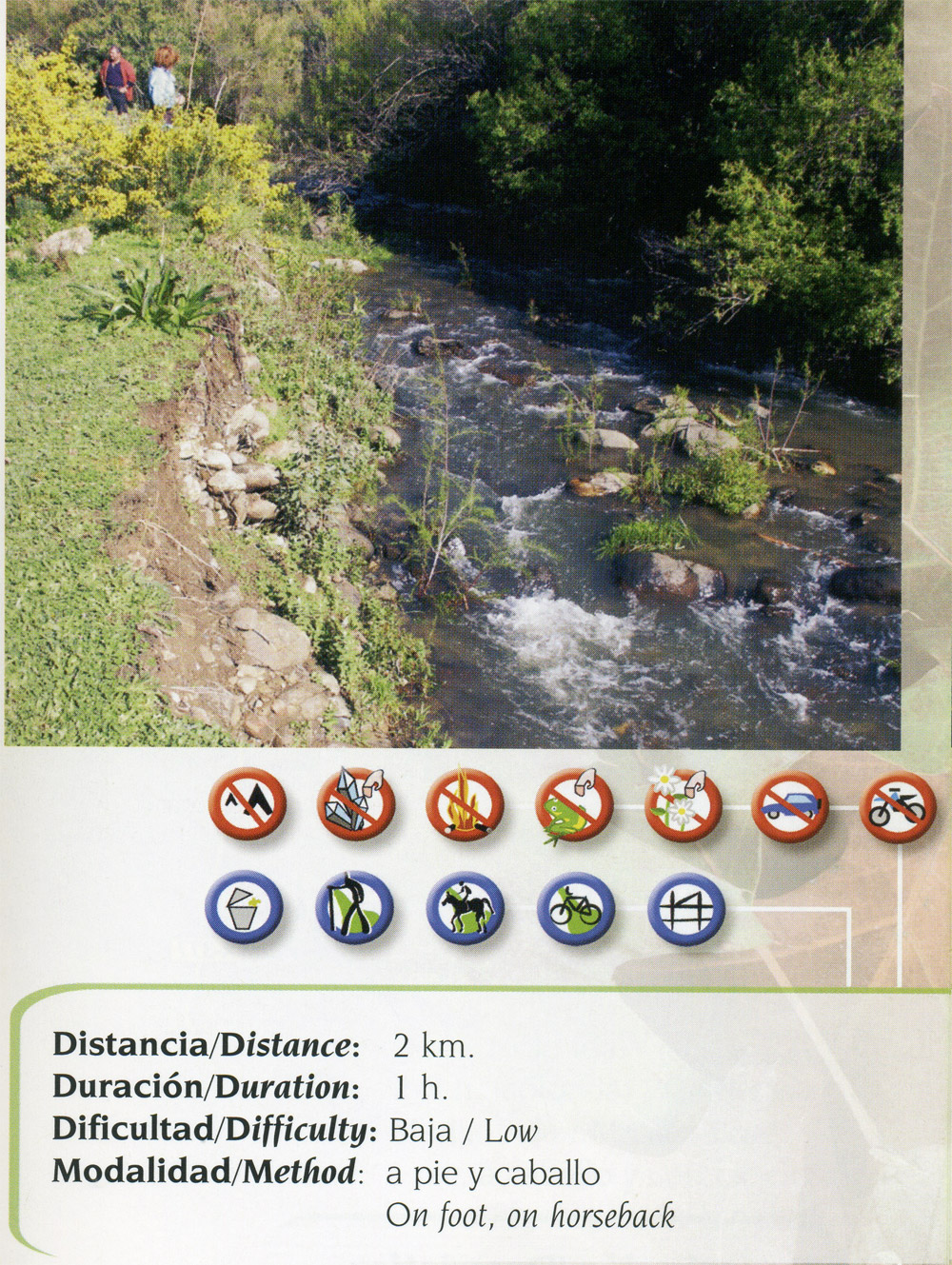 Distance: 7 Km.
Duration: 2-3 h.
Difficulty: Medium-Low.
Method: On foot, by bicycle, by horse.
Description: The route leaves the urban centre of Casares, descending Calle Molinos and turning right at the new cemetery and descending to a crossing where a narrow trail leads to Pasada del Rosario, located in La Albarra stream. The route ascends through meadows to the A-377 road; where, along a hill, passing along the Santa Victoria farmhouse, the trail narrows, turning into a path that ascends to the citrus fruit meadow of the Coatesa farmhouse.

At the foot of Loma del Sidron and Cerro de los Nogales, covered in a dense forest of cork oaks and gall oaks, the trail borders the meadow until reaching Los Nogales farmhouse, just a few metres from the Fluvial Interpretation Centre and leading to the Hermitage of Rosario del Campo, which is found on the other side of the Genal river.

This trial is part of a cattle route known as “Camino de Jimena” or “Vereda de la Mentiras” and is used during the pilgrimage to the hermitage of the Virgin of Rosario del Campo.

Description: Leaving from the urban centre of Secadero, the route towards Venta de los Nogales leads through the fertile meadows of the Guadiaro and Genal rivers. Before arriving at Venta, it crosses the Genal river and visits the Hermitage of Rosario del Campo. Afterwards, it returns to the river and follows the right-hand side in a southerly direction. On crossing “Tablazo” (the meeting of the Guadiaro and Genal rivers), it takes the route of San Pablo along the right bank of the Guadiaro, crossing through a well-preserved tamarisk forest. The route travels along the citrus fruit meadows, passing along the scattered “El Acebuchal”, entering the province of Cadiz and directing itself to San Martin del Tesorillo, where, after crossing the Guadiaro by bridge, it returns once again to the starting point of the route: El Secadero.

Description: The departure is from Casares, travelling along Calle Molinos in the direction of Los Arenales, passing a small hill beside the new cemetery. It descends through Mediterranean forests and meadows until the meeting of the Molino and Albarran streams where they merge to form the Manilva river, beside the Molino de la Americana; from where, along the left bank of the river, it ascends the right slope of the valley to reach a closure and descends again towards Molino del Madrileño, passing through stables and providing views of Molino Cancon and its metallic bridge. The route ascends the left slope of the valley, moving away from the river to overcome a quite spectacular fluvial gorge surrounded by the Karst formation of the Utrera mountain range, from which the coast can be seen while surrounded by dense scrubland consisting of sandarac trees. The route descends passing along a carob tree of notable size before crossing the river and passing along the right bank then continuing alongside a ruined canal which leads to the recently restored Molino de la Animas, where the earth path leads to the Hedionda Baths. 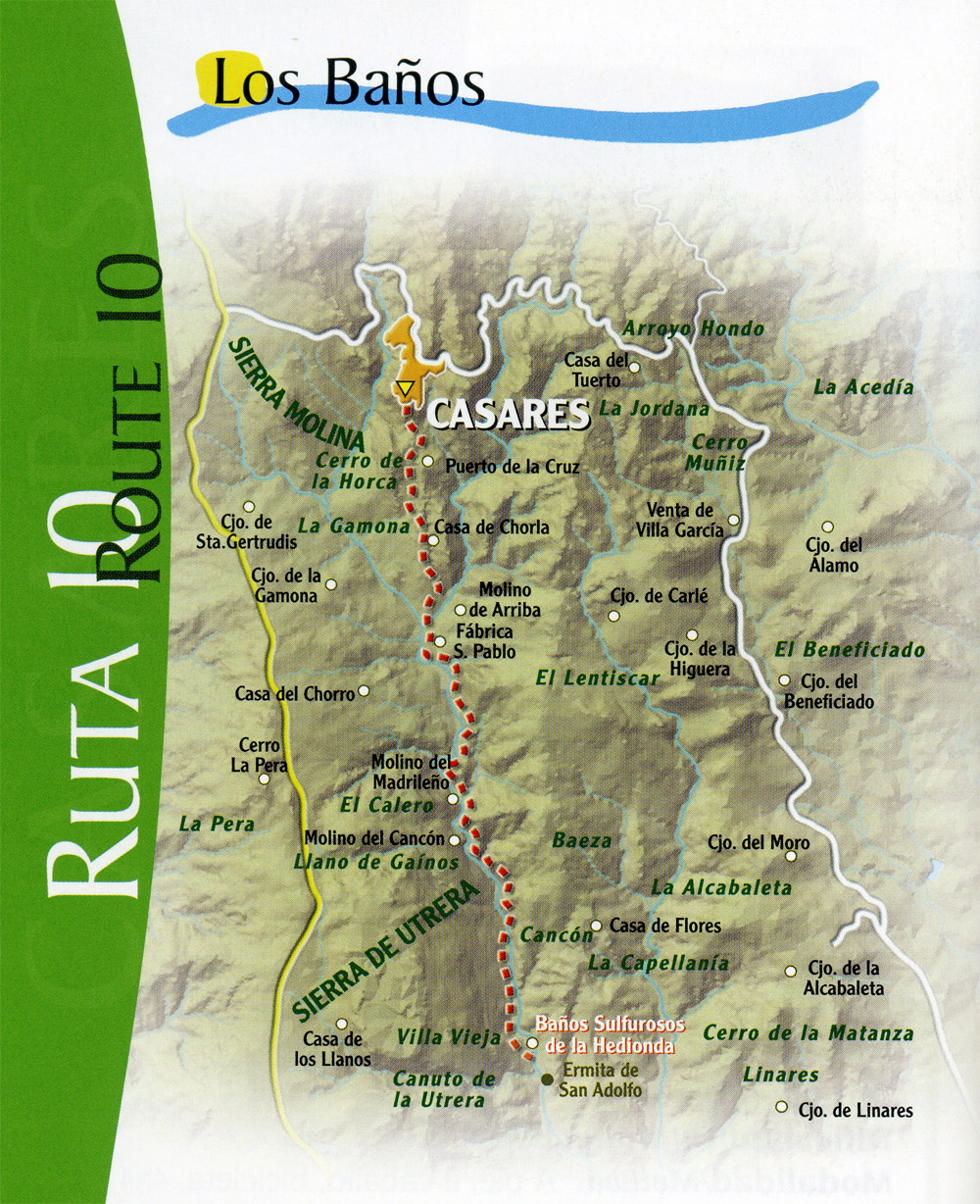 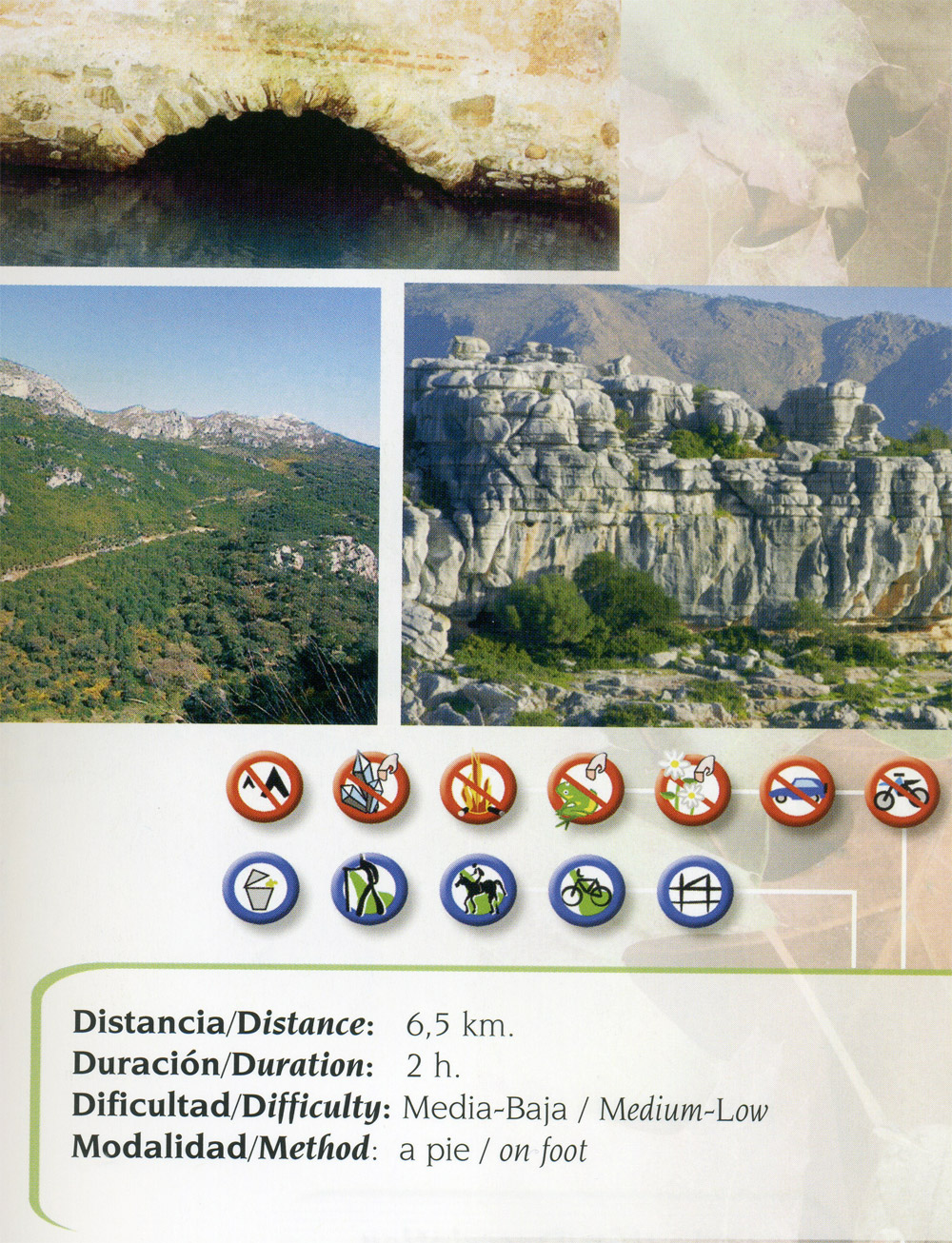 Distance: 2’4 km.
Approximate duration aprox.: 1 hora.
Difficulty: Medium-High.
Method: On foot.
Observaciones: The route crosses through and passes alongside private properties; as such the responsible use of the trail is advised while respecting the private properties at all times.

Description: The trail leaves from the A-377 road, which connects the towns of Manilva and Gaucin, joining a lane that leads to the area of “Los Llanos”, at the foot of the Utrera mountan range. The trail follows this lane, using Canuto de la Utrera as a visual guide, which leads to the left.

Once a residential area has been passed, it continues along the lane that descends until coming to a gate for cattle which should be closed afterwards. The route continues until reaching the interior of the aforementioned Canuto de la Utera, passing through its widest area, where the remains of facilities used in the 70s for oil prospecting can be found. From here, the route narrows and becomes considerably difficult as it passes the riverbed, requiring the overcoming of several inclines, with utmost caution advised in periods of humidity.

Once this part has been passed, the route ends, although it is recommended continuing to the Hedionda Baths, a few metres away, whose peculiarity as sulphur baths and the fact that they were widely used by humans since historic times makes it a first-class cultural element.

It should be noted that this route, as well as the afore-mentioned Hedionda Baths, offers the possibility of appreciating and walking through the Utrera mountain range, a Karst formation – the most southerly in Europe- of great heritage richness on natural, paleontological and archaeological levels and a unique landscape beauty for the region.

This route can also be done the other way around, starting in the Hedionda Baths, although this first part is more difficult.